You are here: Home | Publications | More Commercial Clients And How To Get Them

More Commercial Clients And How To Get Them

A “How-To” Book for Solicitors’ Practices 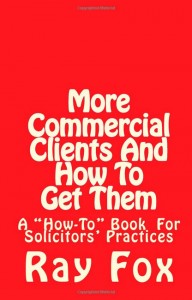 I know we don’t want to admit it or say the words out loud but here goes – “Generally, Solicitors are crap at marketing”. There, I’ve said it. We all know it’s true but what can we do about it? A lot of Solicitors’ Practices will spend a lot of money on marketing, but this doesn’t often pick up more commercial clients – a group who are often more profitable than a typical private client. This book is about how to get more commercial clients. If you want to make more than just a living – this book is for you.

Ray Fox is sixty one years of age. He originally qualified with a B.Sc. (Hons.) degree in Behavioural Science (specialising in Industrial Psychology and Human Behaviour) from the University of Aston in Birmingham. After graduation, he studied for and completed the examinations for The Institute of Chartered Secretaries and Administrators. He is a Fellow of the Institute (FCIS). Following that, he studied for and obtained a Diploma in Company Law and a Diploma in Company Secretarial Practice from the School of Accountancy and Business Studies.

To date, he has worked with over 685 Solicitors’ Practices, Law Firms, Patent Agents and Licensed Conveyancers, both in the UK and overseas. His support for the Legal profession has tended to fall into one of four broad categories:

He has worked for over 300 Solicitors’ practices helping them generate more Commercial Clients. In addition to the above, he is one of the Founder Members and a Director of Core Legal, [see www.CoreLegal.net] which is a networking organisation of professional companies all of whom provide specialist support to the legal profession. He was also a General Commissioner of Taxes and one of the Co-Authors of “Running a Successful Law Firm – Strategies and Tips for Success”.

He is active in Freemasonry, having been Worshipful Master of a number of Lodges and is also a member of The Worshipful Company of Chartered Secretaries and Administrators, one of the modern Livery Companies of the City of London.

If you would like to purchase one or more of our publications, please click the button below.